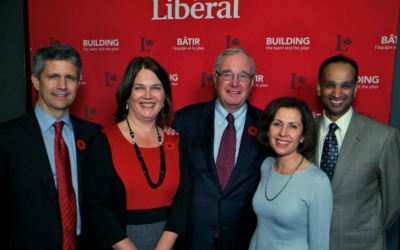 I was recently asked to attend a fundraiser by my colleague and friend Dr.Jane Philpott. For those who don't know, she is a highly respected physician who has decided to enter federal politics. She is the Liberal candidate in the riding of Markham-Stouffville. It has long been said that there are a lack of good people in politics which makes it hard for anything inspiring to get done. Jane is one of those exceptional people.

On this particular night the guest of honour was our ex prime minister, the Right Honourable Paul Martin. It was a terrific night. The audience was knowledgable and highly engaged.  I was struck by how Mr Martin was able to so effortlessly move from one topic to another and speak with a commanding expertise.  He has a wealth of experience and history I think will remember his time in Ottawa very fondly. However what I was taken with most was his graciousness and absolute sense of decency.

One comment in particular that he made night resonated with me as a physician. It really was a call for good people in all disciplines to try and make our public institutions better. There are many problems today in our Canadian healthcare system.  It is far from perfect.  However, the fundamentally fair basis on which it is built, I think provides something we can build on. Mr. Martin's essentially said that there are very few people that ultimately engender more respect in our society then physicians. Physicians are still usually seen as leaders of their communities and champions of their patients. To my way of thinking it then follows that physicians really must play a central role in both preserving and building upon our healthcare system as we move forward. Our insight in caring for the sick and the elderly, the weak and vulnerable among us can greatly advance this dialogue.

The decisions that need to be made in Ottawa and capitals throughout the country must take a multigenerational view that requires looking well beyond four year election cycles.

Having Jane go to Ottawa would be a good first step.